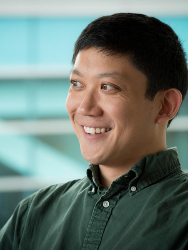 On June 16, 2021, JJ Miranda, assistant professor of biological sciences, alongside Barnard lab technician Nicole Rondeau, published a new article in the Journal of Virology, titled “Rheostat Coordination of Latent Kaposi Sarcoma-Associated Herpesvirus RNA expression in Single Cells.” This research investigates the genetic makeup of Kaposi Sarcoma-Associated Herpesvirus (KSHV), a form of the herpes virus which is usually latent, meaning it lies dormant in the body until encountering circumstances that allow it to be expressed. Using single-cell RNA sequencing, Professor Miranda examined the coordination of RNA levels between two latent genes — LANA and vIL6 — of KSHV, finding a strong correlation between the two genes. With these findings, Professor Miranda concludes that these two genes act together, suggesting that latency in this virus is not a “static state,” but a dynamic, concentrated reaction.